At a time when the BBC is asking grandmothers to speak about frugal living, it might be interesting to ask oneself this question.

Wealth is by definition a subjective concept. For many in our Western culture, for example, stocks and bonds and a large house are held to constitute wealth. For many readers of this magazine, I would suspect that peace of mind, warm relations, healthy food, a clean environment and similar factors would be closer to their ideal of real wealth.

Developing a clear sense of true wealth is presently one of the most crucial factors in the survival of our civilisation. Our present day market economy has defined wealth essentially in material terms because that was what was needed to get loyal citizens to consume ever more, at an ever greater speed, so as to increase the financial income of businesses and one of the most misleading concepts of all time, the GNP (Gross National Product). The race to increase the GNP – which is supposed to measure the wealth of a country – was for forty years the name of the game, and our politicians (whom we faithfully voted in, year in, year out, let us never forget that) studiously paved the highway for ever greater increases of the GNP.

It seemed unimportant that all the dysfunctions of the economy – increasing bills due to spreading crime, deteriorating health of many, environmental pollution and destruction, wars, car accidents and nature-destroying highways, to mention but a very few – were included in the computation of the GNP. The more car accidents, the higher the GNP. Is that wealth?

So what IS true wealth? The other day, I asked a good friend of mine, who can be considered a cultural creative (a relatively new concept, defining people who are modifying their lifestyles in the direction of saner living) what constituted real wealth for him. Here is what he called his ‘short list’ (the complete one, he said, would cover pages):

• The fact that he only does things he loves all day long, from washing up to running workshops
• A very special partner with whom he shares the same vision of existence
• His spiritual vision and his hour after hour, minute after minute contact with the Divine
• Working for a world that works for all (his life aim and that of his partner)
• Excellent health (he has never activated his health insurance!)
• The beauty of nature
• His numerous, close friends
• Wonderful neighbours
• His grandchildren
• His exceptional inner freedom in relation to time and money. (I have rarely, if ever, met someone as free in their handling of their money – he never speaks of ‘my’ money but of the love-energy that flows through his bank account as a tool for a better world)
• A fundamentally positive vision of life
• His volunteer work that brings him profound contentment and satisfaction
• The extremely positive response to his teaching
• Maybe above all, he said, was a life that is BRIMMING OVER WITH MEANING, moment by moment.

And what is it worth to ‘own’ £10 billion if your life is devoid of meaning?

The only material possession he mentioned was a country house he has been sharing for thirty years with people from all round the world.

For years, the very humorously called ‘free’ market has only been free for a small minority, which has been hijacking the economy for its own benefit: before the recent crash, the three richest billionaires on the planet had a personal income equivalent to that of the forty two poorest countries in the world, and in 2007 the top fifty highest paid US private investment fund managers averaged $588 million in compensation (this does not include salaries), that is 19,000 times as much as an average worker’s pay in their country. The trend is similar everywhere.

The present capitalist economy is creating poverty much more rapidly than true wealth, an environment and climate that is deteriorating much faster than governments are ready to admit as anyone who takes the time to do their own research on the internet can find out, societies that are becoming more and more dysfunctional every day, social indicators in the red (rising rates of divorce, child abuse and pornography, violence against women, crime, mental illness, etc.), industrial food that is less and less nourishing – you name it.

The pathetic response of our governments to the recent crisis (pumping $7000 billion of our funds into a banking system that is the main cause of the problem, trying to stimulate consumption) shows that we, the citizens, have to take our future in our own hands. We need to start building another kind of people-oriented economy, which the renowned prophet-economist Herman Daly has been promoting for decades. Above all, as individual citizens we can start building lives based on the possibility of sustainable living presented in Archie Duncanson’s fabulous little book Ecology Begins at Home.

The future truly IS in our hands. Will we build it? 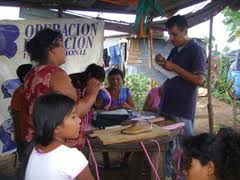 Resting in the palm of a great hand