One of the most challenging aspects of writing The Coming of the Holy Grail and Kick Ass Angels was the gradual realisation that, according to what I was discovering, throughout my life I had failed to grasp the truth about the Divine Feminine, or Mother God. This came as a real shock, as I have always been her devotee.

It was certainly true that, in reading spiritual teachings about Divine Mother, I had often sensed a spark of unease and discord deep within my soul, as though I had hit against a false note. I tried to rise above the feeling, thinking it might be an imposter from my lower mind, such as rebelliousness or self-will.

In spite of these continuing and very earnest efforts of inner resolution, the same feeling came without fail, like a strike on cracked crystal, each time I encountered the given spiritual philosophy about Divine Mother. This taught that she was brought forth from Father God and served him as divine vessel for the bringing forth of creation, that she took ‘his’ seed and nurtured it into form, that ‘Mother’ was earth and ‘Father’ was heaven, that she was the moon (a small lightless satellite) to his sun (a great shining star), and that she was the ‘Second Principle’, somehow eternally fixed at the ‘negative’ end of polarity. Even with an enlightened understanding of all these concepts, even with assurances from spiritual masters of her equality with Father God, an impression remained of her as being second, below, unluminous, smaller, an aspect, a vessel first and a being second; equal, of course, but somehow less equal.

The solution that offered itself was to ascribe this impression to the limitations of the earthly mind: that with all these words floating around such as ‘second’, ‘below’, ‘aspect’, ‘earth’ compared to heaven, etc., the earthly mind in its frailty got hold of the wrong idea. Therefore, nothing was the matter and there was no need to worry. Mother God was second, below, an aspect, earth rather than heaven, moon rather than sun, but she was equal, and that was that. It was just that the earthly mind easily became confused. Case closed.

My own beloved spiritual teacher, White Eagle, whom I know I can trust and whose guidance and enlightenment I hold in honour, speaks of Father God drawing forth Mother God from his heart in order to initiate creation, explaining that, that is why she is the Second Principle. Yet, as I entered deeper into contemplation of the truths of the Grail and the new understanding that the angels are bringing to us at this time, I was being asked to move away from this perception of Divine Mother, however beloved and respected the teacher from whom it issued. And although it might entail standing in the stocks of the traditions of spiritual teachings and having the rotten eggs of self-will, rebellion, arrogance, unenlightened perception, failure to grasp aspectual understanding and other accusations hurled at me, I feel that I must remain steadfast to my integrity and quietly maintain what I believe to be revealed truth.

During the inner journey of unfolding what was given to me, all paths seemed to lead to one conclusion. The Great Mother contained all within her. She was the Source and the All. She gave birth to Father God and so was the Mother of God, but the Father came forth from God, the Mother, who was not only the vessel for God, but God Herself.

A swan contemplating her heart

And so we come to the secret of the number 2, which relates to Mother God but, I believe, does not mean that she is the ‘second’ principle. Some schools of thought have associated 2 with a horse’s or a dragon’s head – the Pendragon – for both these creatures signify Divine Intelligence. But perhaps an even more enlightened understanding sees 2 as a swan contemplating her heart, for in the correct rendition of the figure, the upper semi-circle leans down much closer to its stem. So the serpentine head, Divine Intelligence, serenely studies the heart: Mother God, the serpent, lovingly holds her heart in her consciousness, for within her heart dwells the All, and within the All is the Father

So 2 shows us the Mother containing the All. And she brought forth first from the All the masculine principle – Father God, which is why he can be understood as the ‘first’ principle. But the Mother gave him birth – she dwelt in her being-hood before he was brought forth. The number 2 symbolises her in that perfect being-hood, contemplating the All that is within her. It definitely and decisively does not mean that she came second, and is the ‘second’ principle! No, she is the All.

The great feminist Angela Carter remarked that the idea of women coming second is entrenched in our culture, our religions, our perception and our language, and that until this changed there could be no global equity or resolution to humanity’s problems. But with the correct understanding of the number 2 and the secret it softly proclaims, that change will assuredly come. 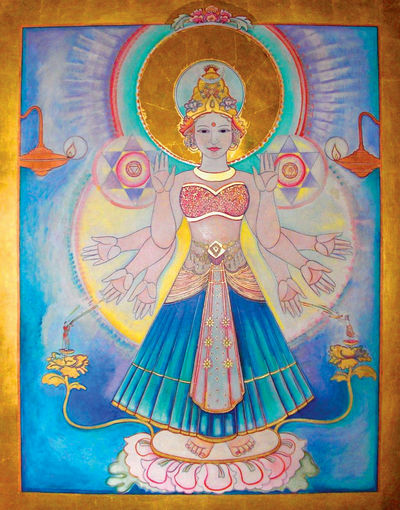 Rock Your World with the Divine Mother