It is apparent that our consciousness is changing and evolving. On the surface it looks as if we are heading toward destruction but underneath the calamities of the everyday is a strong pulse of transformation, from an individual focus to a consciousness evolving into collective endeavour.

In the last 100 years, the world has begun to appear smaller as advanced technologies have changed the way we communicate with each other. Since 1995, with the advent of the mobile phone and continued advances with computer technology, we are now able to connect with each other in seconds – I want to say nano seconds, however we are still evolving to this and then what will be next – thought transference? Some would argue that this would take us full circle.

With the shift in communication as well as other advances such as trade partnerships between individuals, companies and countries; social justice activism with thousands of people voicing their similar views in countries across the world on global concerns such as climate change and saying no to violence against women, many of us have begun to experience ourselves as global citizens.

The new paradigm for the 21st century and beyond will be where “Service is governed by mind and heart equally. The heart conveys compassion while the mind reasons and directs.” (William Meader, lecture, March, 2019)

Are there ways we can more easily facilitate the transition for ourselves and our communities from an emphasise on singular endeavour to being a New World Server?

One powerful medium to support our transition has been called the new medicine of the 21st century and takes the form of Sound Therapy. Using the sound vibrations of the voice, the internal pulse and rhythm of the body, drums, alchemy and classic frosted crystal ‘singing’ bowls, didgeridoo, gong, tuning forks, metal ‘singing’ bowls, cello, angel chime, vibraphone, monochord, double bass, acoustic guitar, the hang and handpans, individuals and trained therapists are energetically supporting the dramatic and quickly changing shifts in consciousness.

It is said that the quartz crystal singing bowl, rich in harmonics and also known for its perfect sine wave, is called the purest tone in the world. It is known to balance the left and right hemispheres of the brain, deepen meditation, induce altered state of consciousness and more. . .

“The pure tone of this perfect wave is capable of correcting imbalances in the human body through the law of resonance. This law states that when two similar energetic systems encounter each other, their vibrations will come into a state of harmonic vibration. Our brain wave patterns in state have the same energetic patterns as sine waves.”

The creation of the modern crystal bowl has also come directly from advanced technologies, in this case from the semi-conductor computer industry. Silica quartz wafers are used as mediums to channel the intense energy used in modern technology. Over time, these principles have evolved to create multi-purpose musical instruments which aremade of the purest silica sand, spun in a centrifugal mould and heated to about 4,000 degrees. The evolution of crystal singing bowls continues and alchemy crystal singing bowls bring another energetic dimension to these tools of transformation. Very fine silica quartz crystals are combined with precious gemstones or rare earth, precious metals or rare crystals to make Alchemy crystal singing bowls – a giant step forward in the energetic footprint of crystal singing bowls and one that leads us forward harmonically into the future.

So how do the crystal singing bowls affect us? It has been written that our healthy human tissues are more crystalline than fluid in nature. Mitchell Gaynor, MD. Director of Oncology and Integrative Medicine, Strang Cancer Prevention Center, NY states that “the framework of bone and collagen is partly comprised of calcium phosphate crystal. All these crystals must have a “resonation potential” and no doubt the sounds produced by quartz crystal are more harmoniously in tune with our own crystalline structures than sounds emitted by other bowls or instruments”.

The power of intention cannot be underestimated and is potent in directing the purpose of the sound vibrations of the crystal singing bowls for transformation. As we know crystals are used to store massive amounts of information because of their unique properties to store, transmit and transduce energy. It’s so interesting to note that modern science, the energetic field of study and enquiry and the world of music are drawing closer in their understanding of the potency of sound, crystal and intention.

Marcel Vogel, who worked as a senior scientist at IBM for 30 years and spent many years researching quartz crystals, concluded that,

“the crystal emits a vibration which extends and amplifies the powers of the user’s mind. Like a laser, it radiates energy in a coherent, highly concentrated form, and this energy may be transmitted into objects or people at will.”

Crystal singing bowls act as a bridge between ancient wisdom and modern technology and this synergistic relationship is changing, inspiring, healing and recalibrating individuals, groups and environments all over the world.

A number of years ago, I was invited to play the crystal singing bowls for a group of women who had breast cancer that had metastasised. None of the women had experience of complementary medicine before and they all found the sound session very relaxing, soothing and comforting. The sister of Peggy, one of the women, phoned and asked if I would perform a group sound session for friends and family at Peggy’s home. I was almost finished the hour and a half session when one of Peggy’s friends let out a loud gasp. I finished playing and after a few minutes went over and asked, “Is everything OK here?” Peggy’s friend said, “Look at my neck I can turn it around to my shoulder.” “2 years ago, I had a car accident and received whiplash and I haven’t been able to turn my head since then.”

Peggy’s friend had a physical response to the sounds of the crystal singing bowls. Her clavicle slipped back into the correct position and she was able to turn her head freely and comfortably for the first time in 2 years.

So how did this occur? As Mitchell Gaynor (1999: 117) found while working with cancer patients as a leading oncologist and Director of the Strang Cornell Cancer Prevention Centre in New York, “The bowls demonstrate the truly manifold possibilities for healing through vibratory sound. The principle of entrainment explains these possibilities; our body-mind systems are “retuned” by the bowl sounds and the effects can be physical, psychological, spiritual or all three at once.”

Peggy’s sister phoned me several weeks after our session to tell me that Peggy had passed away. She wanted to let me know that the crystal bowl music – “Opening the heart to Joy” CD – I had given Peggy, was played for her whenever her pain became overwhelming.  Peggy’s sister said that the music brought her great comfort and she was able to sleep. The family played the CD at Peggy’s final farewell.

The alchemy and quartz crystal singing bowls are powerful new world technology tools for our evolving consciousness and the sound vibration they bring to the world is peaceful, powerful, harmonic and loving. If you have the opportunity to sit or lie down and listen to a Master Practitioner of the Alchemy and Crystal Singing Bowls you may journey to the place of infinite quiet where the many become the One and the One becomes the many.

Susie Nelson-Smith is celebrating 20 years of playing the crystal singing bowls and 15 years teaching professional training and study programs in Crystal Sound Therapy and 25 years teaching Crystal Healing with crystals and gems. She has degrees in English Literature and a in Communication Management. In December 2018, Susie published her new book, “One Heart Affirmations” through Yarnspinners Press Collective and has produced 4 crystal singing bowl CDs. She travels the world teaching in extraordinary sacred places – Costa Rica, Bali, Cambodia, Australia, and the USA. In June and 2019 Avebury Glastonbury and Wiltshire are calling. Details can be found on her website www.crystalsoundandlight.com 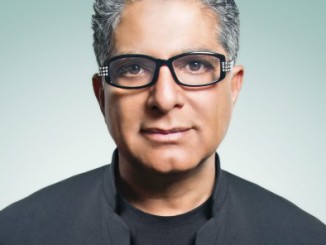 DEEPAK CHOPRA AT ALTERNATIVES: Super Genes: The Key to Health and Fulfillment

The Alchemy of Voice: The Creative Power of Sound